Wolves have taken the football world by storm this season, with fantastic victories against the big 6

The 6’3″ shot stopper joined Wolves last Summer on a 4 year deal, after the World Cup in Russia having spent his whole career at Sporting Lisbon.

Patricio has won 70 caps for his country, keeping a clean sheet in the 2016 European Championships final to help Portugal secure their first ever major tournament victory.

Hague Fasteners were thrilled to meet the Wolves Players and Management Coaching Team and congratulated them all on a very successful season back in the Premier League. Thank you to everyone at Wolves for a very enjoyable afternoon, we look forward to continuing our sponsorship into the 2019/2020 Season. 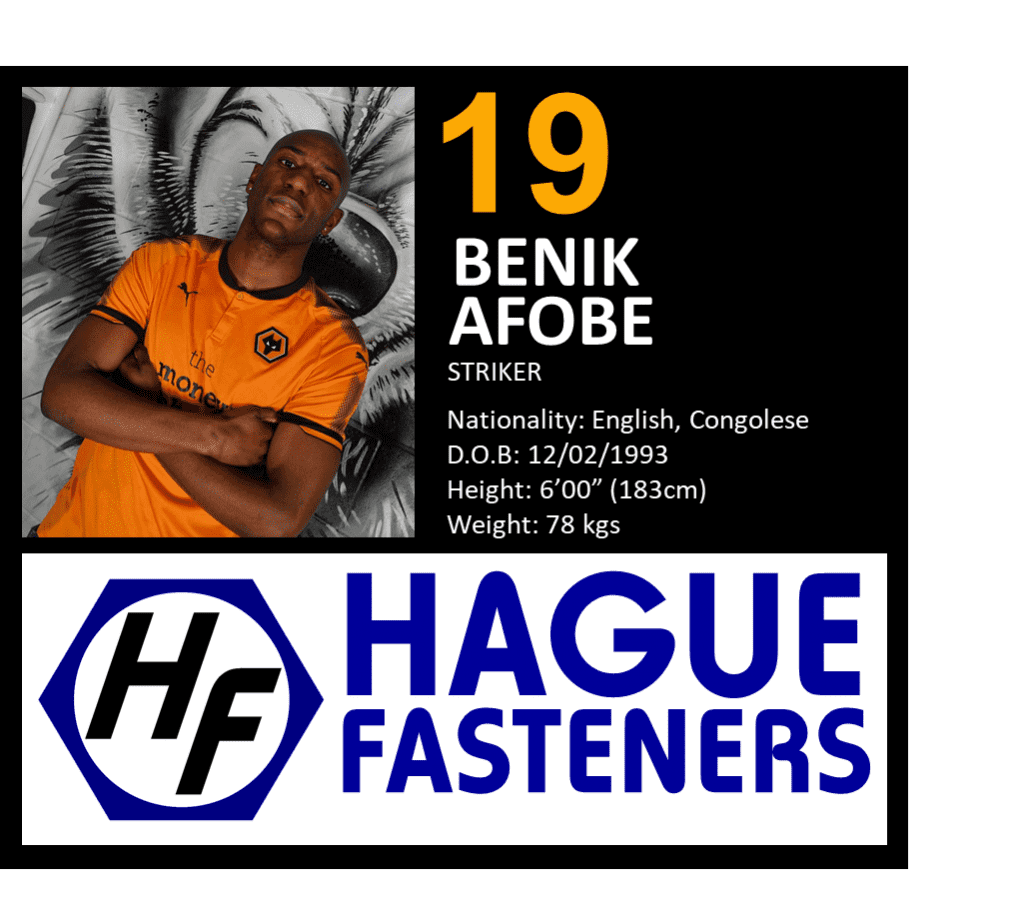 Hague Fasteners are delighted to team up  with Wolverhampton Wanderers to become the official sponsor of new signing Benik Afobe. Hague Fasteners have been a long admirer of the striker and are pleased to further their support for him.

Afobe is the latest addition to  Nuno Espirito Santo’s side with hopes of giving Wolves a final push towards the premier league.

Afobe previously signed a three-and-a-half-year deal with Wolves for a reported £2 million in 2015. He scored on his debut for the club three days after signing to confirm a 2–0 home win against Blackpool. He ended the season having scored 23 goals in 48 appearances for Wolves.

On 10 January 2016, Afobe joined Bournemouth on a four-and-a-half year deal for an undisclosed fee reported to be a club record of £10 million. Afobe played 70 games and scored 11 Goals for Bournemouth.

Hague Fasteners are proud to team up once again with Wolverhampton Wanderers for the 2014/2015 Season that kicks off again this Sunday 10 August at Molineux.

Hague Fasteners have been a long admirer of the young Republic Of Ireland Goalkeeper Aaron McCarey and are pleased to extend their support for him for the new season. 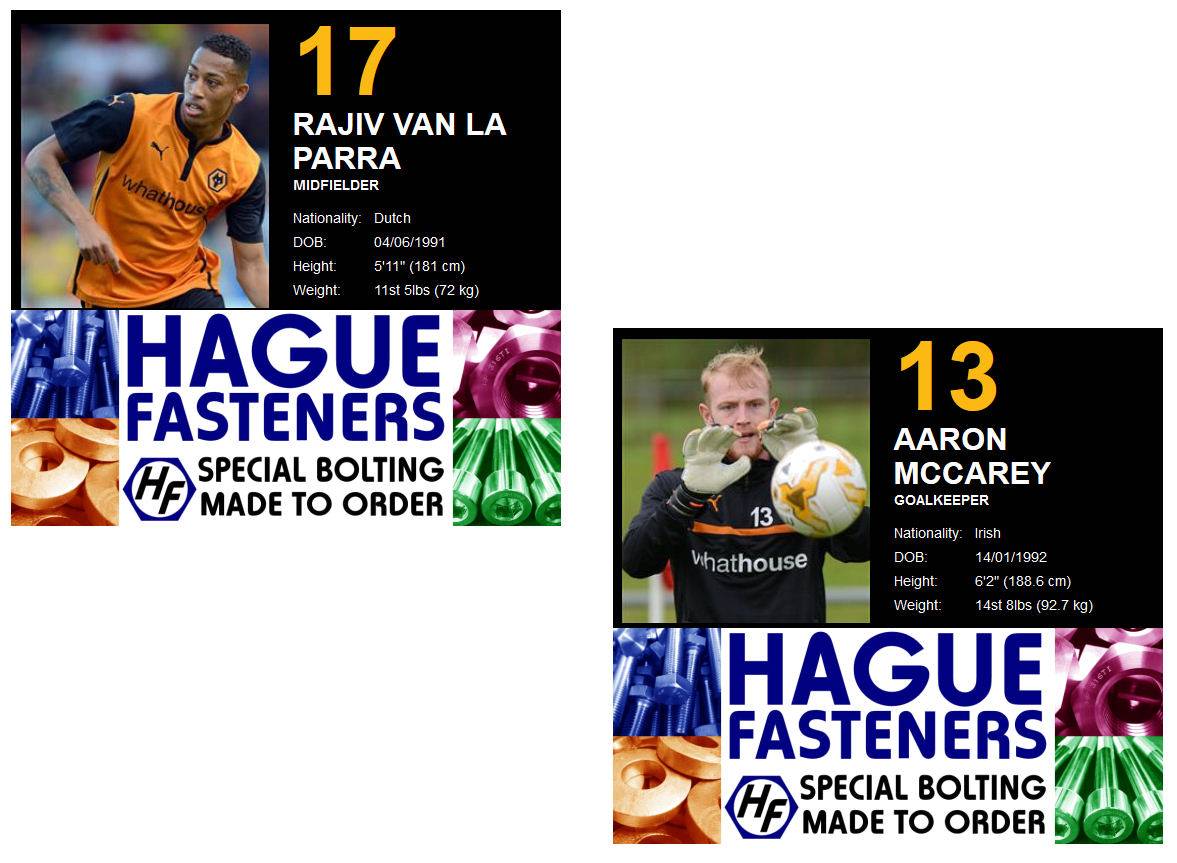 Look out for the Hague Fasteners new look Sponsor Banners in the Home Match Magazine from Sunday.

It’s been a rather dramatic fall from grace for local Football team Wolverhampton Wanderers, from mixing with the best teams in the World some short 2 seasons ago, Wolves now find themselves in the English third tier of Football “League One”.

Hague Fasteners have been proud supporters of their local football team, and despite the somewhat less glamorous appeal of League One football, Hague remain proud to be associated with Wolverhampton Wanderers.

The overpaid “stars” that failed to deliver the football required to survive in the Premier League or to compete in The Championship last year have been shipped out and the new Management at Wolves have re-invigorated the Club by promoting the Youthful Stars of the future to first team action.

Hague Fasteners are proud to be sponsoring 2 of these players and look forward to a more exciting season than has been endured for the last few years. 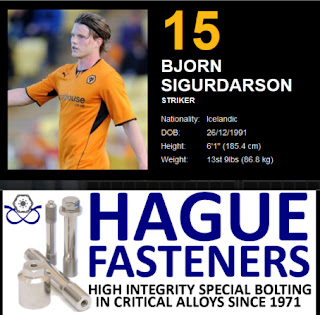 Icelandic striker Björn Sigurdarson arrived at Molineux from Norwegian club Lillestrom in July 2012.
He signed a four year contract after joining for an undisclosed fee.
Half-brother of former Wolves midfielder Joey Gudjonsson, Sigurdarson made his debut for the club as a second-half substitute against Leeds United at Elland Road, scoring his first goal in the away victory at Peterborough in September, 2012.
The forward has been capped at under-17, under-19, under-21 and senior level by Iceland, making his full international debut in a Euro 2012 qualifying victory over Cyprus.
AARON McCAREY 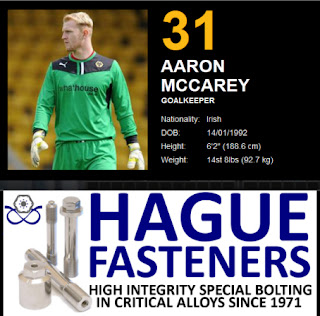 Aaron McCarey was a highly regarded goalkeeper with Monaghan United before being spotted by Wolves and joining the club in January, 2010.
Aaron had actually agreed to join Wolves the previous September, but the deal couldn’t be ratified until the transfer window re-opened.
Nevertheless, he arrived in November, 2009, to start training with the club and settle in to his new surroundings, eventually making his debut in a reserve game at Chelsea.
The keeper, who has turned out for Republic of Ireland Under-19s, made several appearances from the bench for the first team in the pre-season friendlies prior to the 2010/11 season.
During the campaign he enjoyed a successful loan spell with AFC Telford, in amongst some impressive performances for Wolves reserves.
And he also helped the Republic of Ireland Under-19 team qualify for the summer’s European Championships in Romania, taking place in July.
Prior to that, McCarey turned out for Wolves in a 3-2 friendly win at his former club Monaghan.

This annual event is attended by Sponsors of the Championship Club, and Hague Fasteners enjoyed an afternoon with the Staff and Players of the Club.

Hague Fasteners were joined on their table by their sponsored player, Bjorn Sigurdarson. The Wolves number 15 is an Icelandic international who plays as a striker.

Björn presented Hague Fasteners CEO, Jon Hague with his Home & Away match shirts which he cordially signed over lunch.

Hague Fasteners were also thrilled to be joined by the Ireland Under 21 Goalkeeper Aaron McCarey, who is currently breaking into the Wolves first team after a successful loan spell with Walsall.

Despite a rather disappointing season Hague Fasteners, being a long established Wolverhampton based custom fastener manufacturer, are proud of their continued support of Wolverhampton Wanderers and wish them success as they strive to maintain their Championship status over the remaining few weeks of the season. 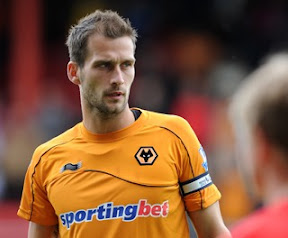 Ralin Group Bespoke Bolting, a Wolverhampton based Special Fastener Manufacturer, are proud to announce they are the sponsor of Roger Johnson, the Club Captain of English Premier League team, Wolverhampton Wanderers, for the 2011/2012 Season

Two days later, Johnson signed a four-year contract with Wolves. The fee was officially undisclosed, and the club claimed that the reports on its size were inaccurate. Ralin Group were given the opportunity to sponsor the highly rated player and immediately accepted.

Ralin Group have been proud supporters of the Football Club for decades, long before the recent return to England’s top league and are now thrilled to support the club as they enter their 3rd successive season in the Premier League.