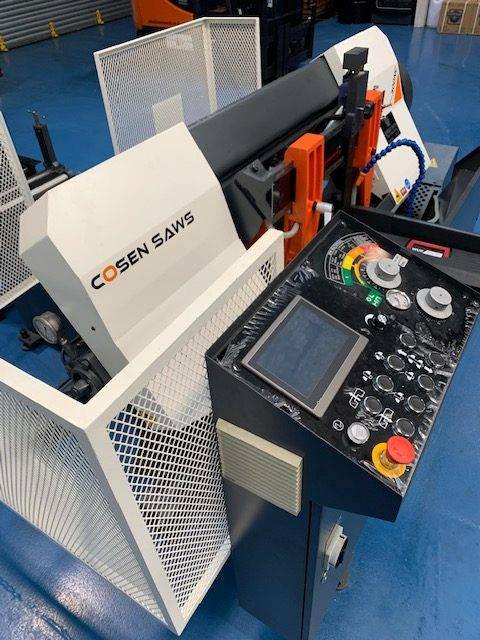 Hague Fasteners are please to take delivery of another new steel bar Cutting machine to our ever expanding Special Fastener Production Facility.

Our new Steel Bar Cutting NC controlled automatic bandsaw is optimising our incoming material (up to 300mmø) ready for our in house special fastener manufacturing.

This new investment has been made due to Hague’s ever increasing order book and with the sawing often being the first stage of production. This new plant sees material received and processed much faster and with higher accuracy.

The accurate NC controls also enable the optimum speed and feed rates when cutting some of the super alloys and Nickel based materials such as Nimonic, Hastelloy, Inconel and so on.

Continued growth and investment assured Hague’s clients of the very best in customer service and reliability.

Hague Fasteners In The News Again

The Companies relocation at the end of April has seen an increase in Capacity and Productivity and a boost to Sales.

You can read all about it on the Express & Star Website or download the article as a PDF.

This story has also been picked up by many trade journals and industry news sites.

Hague Fasteners in The Manufacturer

Read the full story below:-

A leading UK manufacturer of non-standard fasteners is on course for a record-breaking year following £300,000 of work to supply specialist products to the oil and gas, petrochemical and construction sectors.

Family-owned Hague Fasteners, which has recently been awarded ISO9001:2015 certification, has seen a 25% surge in orders. This was perfectly timed after the company moved into a new, 8,500 square foot factory in Willenhall – three times larger than its old premises – earlier this year.

“We had reached bursting point at our old site, so knew 2017 was always going to be the year we made a move,” explained Jon Hague, the company’s CEO, who runs the firm with his wife Claire.

“It took us six months to find the right place, but as soon as we saw it we knew the location was ideal, giving us more space to take on new clients and the ability to plan the layout down to the finest detail.”

Hague Fasteners also hope to take on six new members of staff, some of whom may be apprentices, by the end of the year, Jon continued.

The company has been in operation in the Black Country since 1971, and was established by Jon’s father, John. It has since grown to specialise in bespoke, small-batch products including specialist fasteners, studs, nuts and bolts.

“Our bolts, fasteners and pins get used in a wide range of applications,” said Claire Hague. “In the last year alone, we’ve supplied to a blockbuster film, high profile sports stadiums and one of the world’s most prominent buildings.”