Hague Fasteners are a Special Fastener Manufacturer, servicing all Global Industries with Bespoke Special Fasteners, Hague are manufacturing small quantities (1Pc, 5Pcs, 25Pcs, 100Pcs Through 500Pcs) of custom bolting and special fastener components to all International Standards and to Customers’ own designs and OEM Drawings, with the added peace of mind of Quality Assured British Manufacturing.

Hague Fasteners have taken a firm stance to only utilise the very best materials making them a reliable Special Fastener Manufacturer for the highest integrity components, setting Customer Service, Quality & Integrity as our focus. it is for these reasons Hague Fasteners now enjoy great praise from their clients around the World. 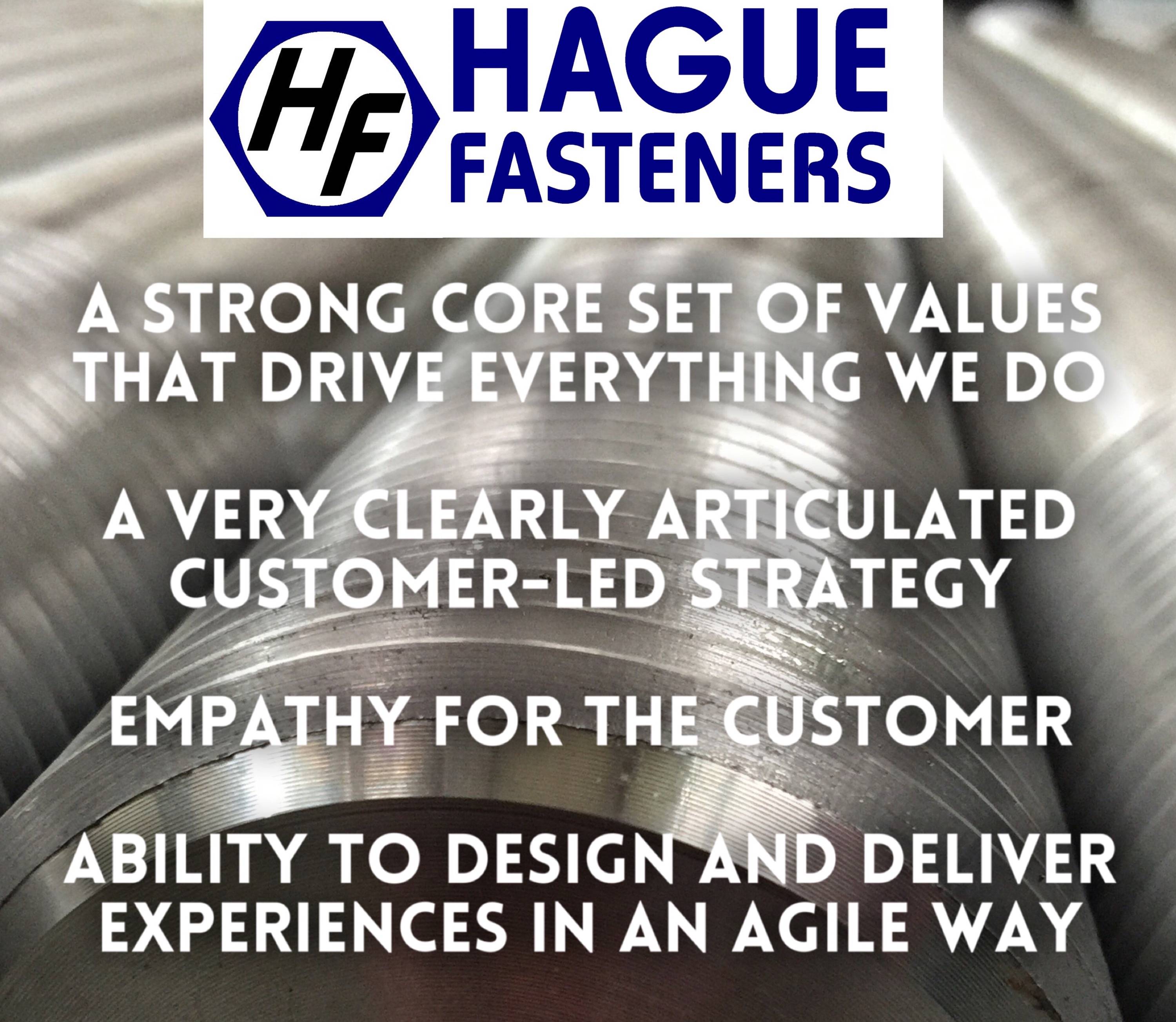 Unrivalled experience in manufacturing Fasteners to Clients designs. Total Customer Focus & Ethics make Hague Fasteners Limited, Special Bolting UK stand out from the crowd.
Hague will give you a refreshing change.
Small Enough To Care : Big Enough To Deliver (since 1971)

When others fail to deliver, you can rely on Hague Fasteners to deliver. 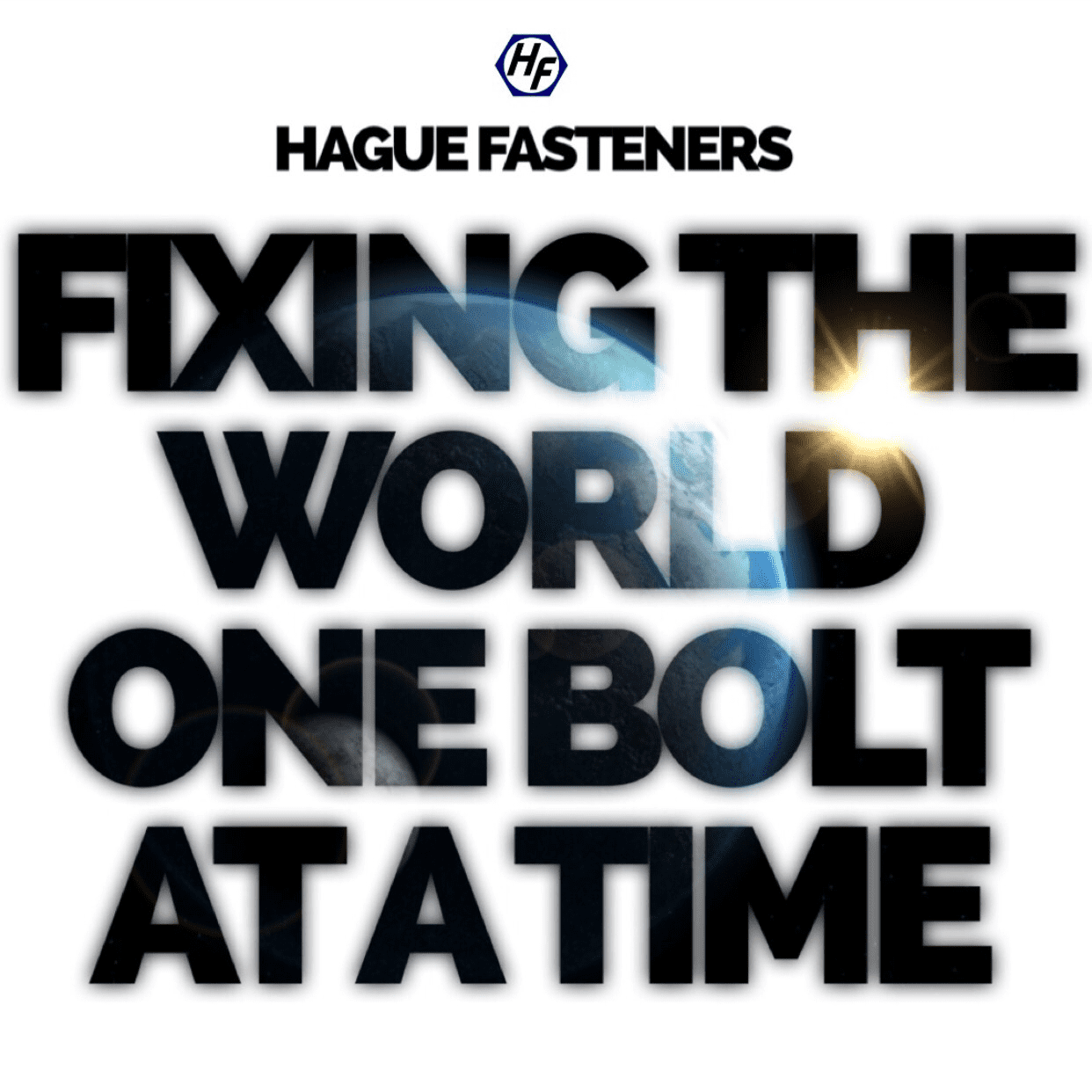 This week we recieved a request to supply over 1500kgs of Custom Manufactured SuperDuplex Hexagon Bolts & Nuts in less than 5 days.

Within 24 hours of winning the order the round bar material hit our production facility in the heart of the UK and our loyal team set about the massive task asked of us.

The customer service ethos throughout every member of Hague Fasteners staff guaranteed that our Customer would have the order in hand when needed, regardless of the challenges that would undoubtedly crop up despite perfect planning and scheduling.

It is the pride and sense of achievement that sets Hague Fasteners apart, often taking control of another Fastener Suppliers failure to deliver and acting with complete sense of purpose to minimise Plant downtime and financial penalties.

It was pointed out, after completing production in less than 72 hours, that other fastener companies take longer to supply the certification for their supplies than it takes Hague Fasteners to manufacture and deliver 1.5Tonnes of Super Duplex Fasteners.

As the original Breakdown Bolting Service Providers, Hague Fasteners have been doing this for 44 years, why go anywhere else ?

The call for quality British Manufactured Special Fasteners is ever increasing as Critical industry shy away form imported and inferior manufactured bolting to drawings.

Hague have enjoyed a record breaking year as industry returns to it’s roots following an industry realisation over the last decade that cheap imports are not a solution where high quality, timely deliveries and assured customer service is a necessity.

Hague have a long standing family tradition of putting Customers needs first and are proud to always go the extra mile to ensure every client gets the very best attention regardless of the scale of their needs.

Hague Fasteners continued growth necessitates continued investment in additional plant and machinery and this week we have taken delivery of another Bar Fed 4 Axis Twin Turret CNC Lathe to ensure even greater throughput and thus ensuring we can keep up with an ever growing demand for our high integrity British Manufactured Special Bolting whilst ensuring timely deliveries whilst striving for 100% Customer satisfaction. 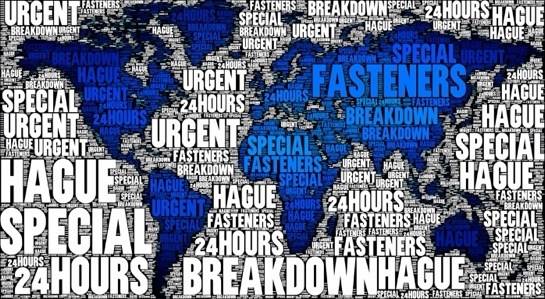 It is no idle claim that Hague Fasteners are poised to service your special fastener demands 24 hours a day, 7 days a week, 365 days a year.
Hague Fasteners were established in 1971 with the sole aim of servicing the flourishing oil & gas sector. Hague’s “what you want, when you want it” ethos saw an immediate solution to troublesome plant breakdown and unexpected pipeline issues.

Over the following four plus decades Hague have ensured they are always at hand to resolve any plant breakdowns or urgent supply demands for special fasteners or custom fasteners, manufactured fast and supplied efficiently as if from stock. The urgent breakdown service provided by Hague Fasteners effectively means every special fastener is available from stock.

When there simply has to be a supply of special fasteners, Hague are the solution.

No matter where you are in the World you can always get a response from Hague Fasteners.

Outside of normal operating hours just call our normal phone number and select “Option 2” to speak to a member of Staff.

Our Sales email address is read 24 hours a day, simply drop an email over for immediate attention.

Our Web “Live Chat” is manned 24 hours a day, just open up our website and select “Live Chat” at the bottom of our pages.

It has never been easier to get a response to your emergency bolting needs.

Hague Fasteners are all setup and ready for 3 days of Exhibiting at the European Offshore & Energy Exhibition 2014 at the NEC Birmingham. 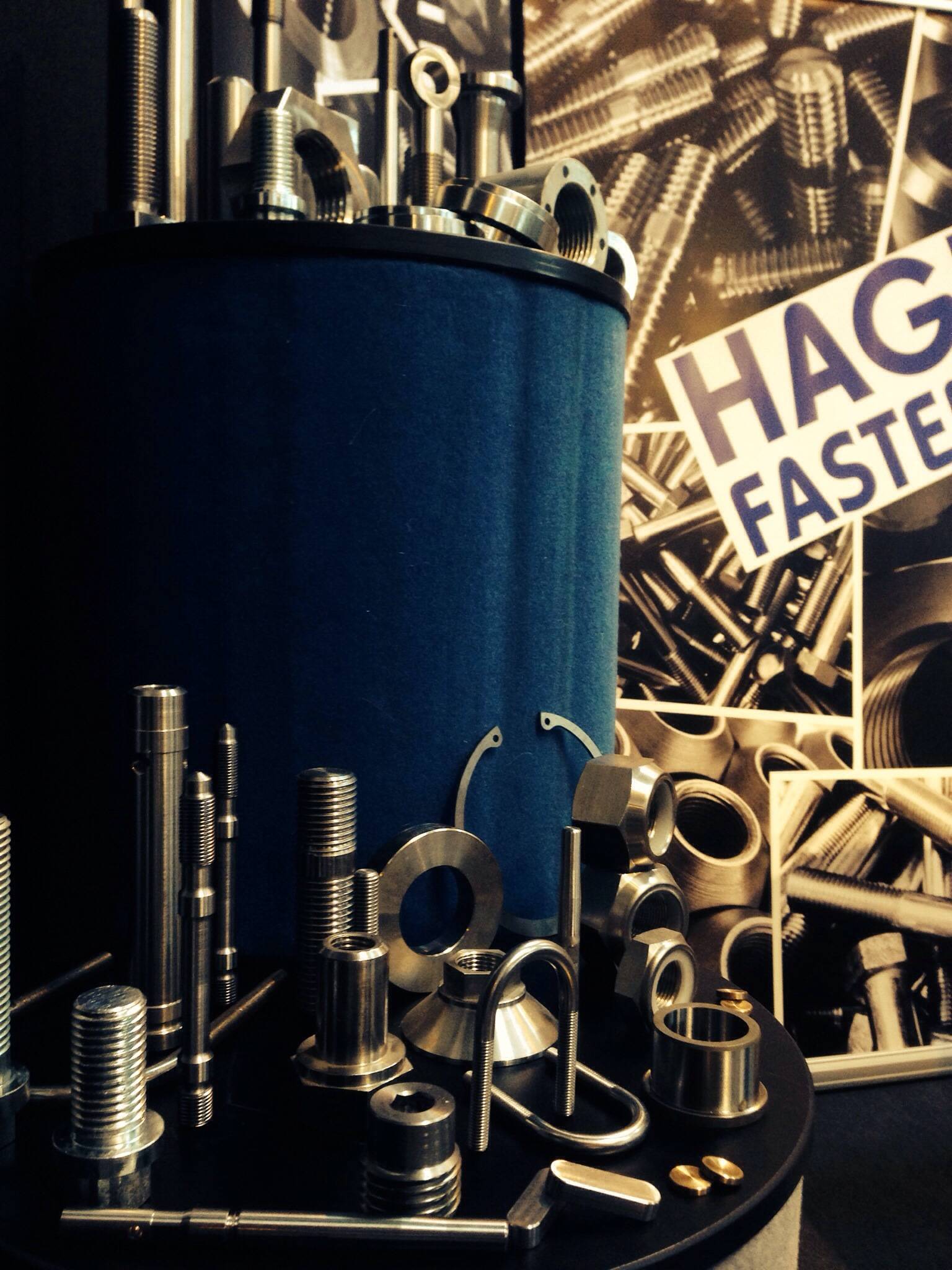 The stand E262 was expertly set up in anticipation of an extremely busy 3 day event meeting existing customers and introducing our Special Fastener expertise to new contacts visiting from around the world. 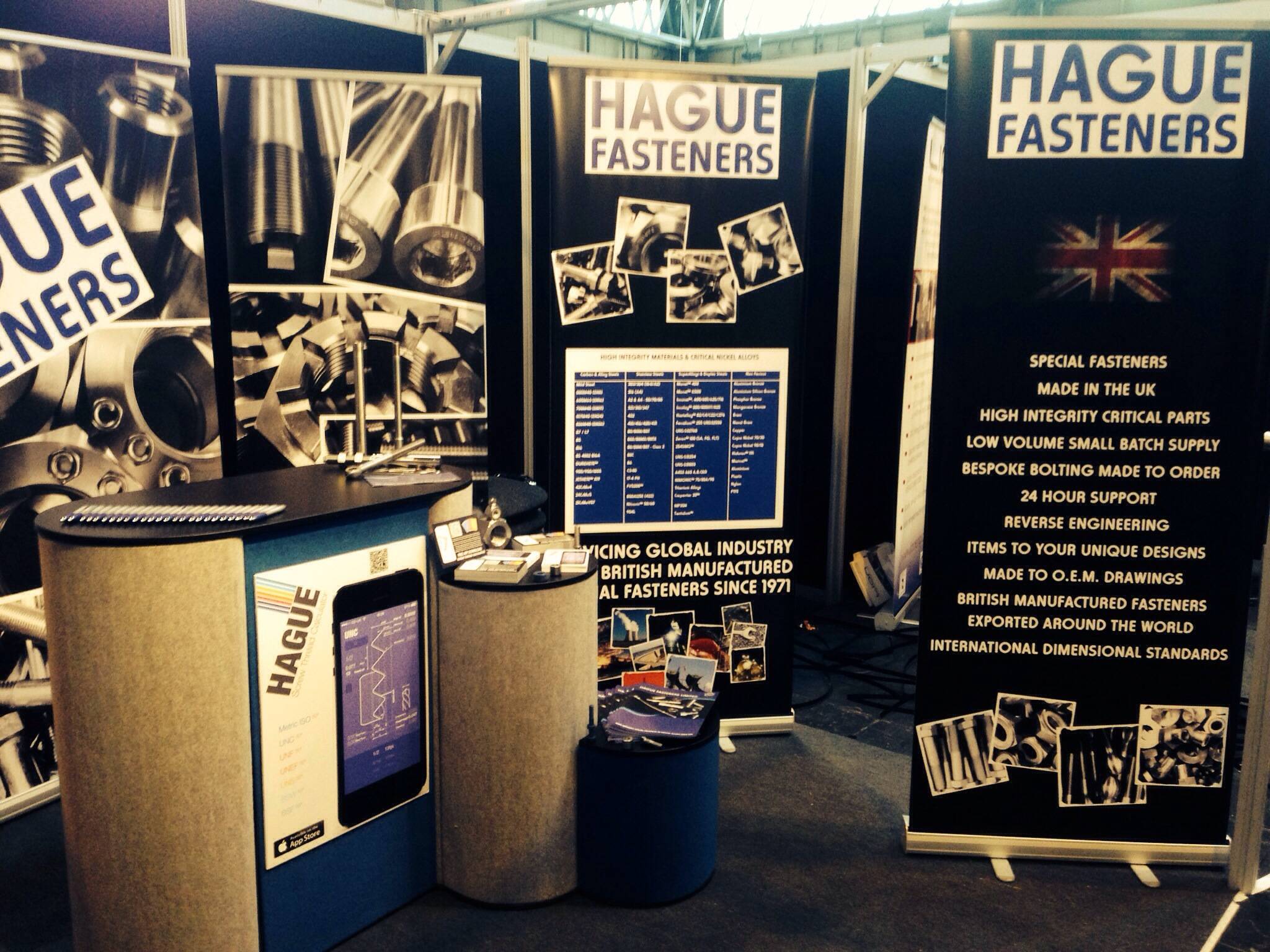 Please be sure to pop along and meet us between the 8th and 10th April where our team are on hand to introduce themselves and detail our services to you face to face.

Hague Fasteners have once again invested in increasing production capacity as sales records continue to grow reaching record breaking profitability levels not seen since the 1980’s.

This weeks new arrival at their Watery Lane Special Fastener Production facility sees CNC capacity increase by 20% since the start of the year. 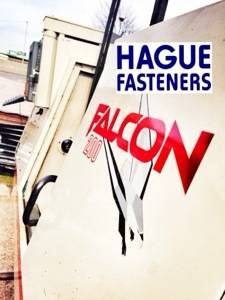 Following the successful apprentice training schemes of 2013 Hague Fasteners are now seeing the skills acquired over the last 45 years being passed on to their new generation of Special Fastener technicians.

Latest 3D modelling of special designed customer drawings now ensures manufactured Special Fasteners can be taken from a drawing to a physical component as if from stock.

It is a proud boast that Hague’s customer ethos can see an item made from round bar and supplied to a customer, faster than some bureaucratic fastener stockists need to pick from stock and make available for collection. A sorry state of a complacent fastener industry that Hague Fasteners have always been proud to be different from.

B50A125E is a popular Creep resistant steel which is hardened and tempered to give critical reliability in high temperature applications with a usual upper continuous operating temperature limit of 580 degrees C.

Hague Fasteners manufacture 422 stainless steel bolts and general special fastener products that are designed to be used at elevated high-temperatures whilst maintaining their high strength.

Hague’s special fasteners in B50A125E (422 Stainless Steel) are made to order and used commonly in thermal engines and power plants.

Through heat treatment, high mechanical properties can be obtained.

Hague’s Alloy 422 Bolting is used in applications such as compressors or steam turbines and also in aircraft parts, valves, & other high temperature applications. 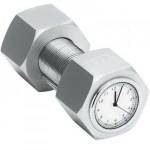 Founded in its earliest form in 1971, Hague Fasteners soon moved into their Custom Special fastener manufacturing facility on the corner of Brierley Lane and Batmanshill Road in Bilston where we remained for decades. 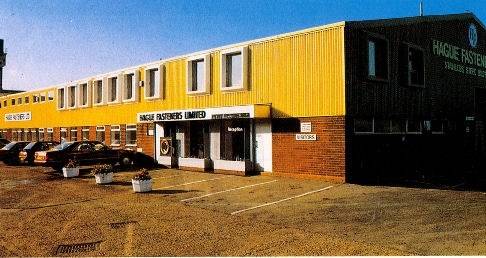 The Hague Family who owned the “Winston Works” site were approached by housing developers in 2006. A deal had already been struck with industrial property owners down the Batmanshill Road, and the developers needed the Brierley Lane frontage occupied by Hague Fasteners. The concluding deal was made and Hague Fasteners were on the move after over 30 years.

Hague Fasteners soon identified an ideal more modern premises close to the centre of Wolverhampton. A tailormade custom bolting facility was set up on Watery Lane, with the best of the old manufacturing plant making the short move across the Black Country. 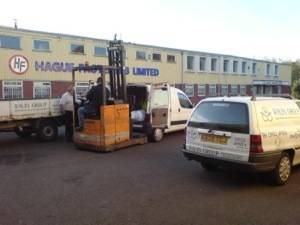 February 14th 2008 was the date of the move, the Bolt production facility in Bilston came to a standstill and the trucks rolled with Stocks and machines The staff padlocked the gates at Winston Works for the last time and made the trip to the new facility in Willenhall.

Improved conditions and investment in new plant and machinery ensured the future was to be exciting and bright.

6 years have flown by and Hague Fasteners have gone from strength to strength since relocating, the Directors & Staff have not looked back, so on this anniversary we take a quick look over our shoulder to remember where it all started.

Fond memories from our proud history.

Many of our Customers remember the Hague name from the early years when Hague Fasteners first commenced manufacturing in the heart of the Black Country Fasteners industry in the West Midlands.

In their formative years Hague Fasteners services many industries with their precision engineering components. From the earliest North Sea drilling projects alongside Shell & Phillips Oil, to main line pumping solutions with Weir Pumps, Hague excelled in the rapid production of Quality Fasteners and Taylormade Bolting Solutions. 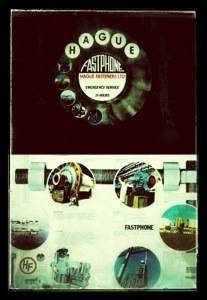 Take a trip down memory lane ! We are proud to publish from our archives one of our earliest Custom Fastener Brochures which shows proudly a few of the early collaborations with some of the Worlds top engineering service companies.

Keep tuned to Hague Fasteners news as we proudly show off more of our historic Fastener Brochures.